Skip to content
The UI Theater Department will immerse audiences through intricate design and personified characters in its production of "A Midsummer Night’s Dream."

Lights glimmering like a starry night shine through strings of cloth draped above a derelict theater set with exposed brick and shiplap. Each color of light corresponds with the moods of the characters — moments of anger in an unforgiving red, green in bouts of jealousy, and romance in a dream-like state of blue and purple. As the Moon gleams and a light fog appears beyond the distant forest, the lights reflect off the wooden floor of the theater, immersing characters and audience members in a wistful dream.

This weekend at Mabie Theater, Shakespeare’s A Midsummer Night’s Dream will illustrate the wonderment, the pain, and the complications of love as it evolves into disarray when the world seems out of sync as a person lusts after someone who is in love with someone else.

“[The play considers] what happens when loyalty is called into question,” said actor and graduate student Catie Councell, who plays Hippolyta and Titania — two roles often played by the same person because both characters are powerful women in a relationship with men who are also powerful. Hippolyta is Queen of the Amazons and engaged to Theseus, the duke of Athens. Whereas Titania is the Queen of the Fairies and wife of Oberon, the King of the Fairies.

“[Titania is] aware that Oberon is cheating on [her],” Councell said. “Faith is a big topic in this play, [posing the question] ‘Are you going to be faithful to the person you pledge your love to?’ ”

As chaos escalates, the ambiance intensifies while the play uniquely explores romance with magic, dreams, a stunning set, and charming language. Of course, Shakespeare’s language is what differentiates his plays from the rest, but audiences should not feel overwhelmed when attending the performance.

The artistic team aimed to make Shakespeare’s work more accessible to the public by refining complex portions of the text and setting the play in the 1920s, centuries after the play’s original creation in the late-1500s.

“In A Midsummer Night’s Dream, there is a lot of beautiful and famous language, so we didn’t want to cut it all, but we want to make sure the experience is focused on the [vivid plot], so [the audience] doesn’t get lost in speeches [difficult to interpret],” said dramaturg and assistant director Morgan Grambo. “As we cleaned the text, we tried to remove [complex language] and references, [for which] somebody would have to pull out an annotated script to understand.” 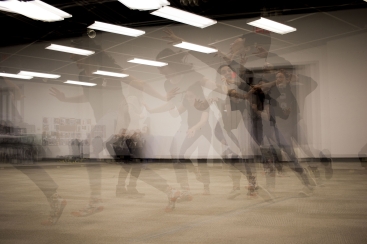 The actors even conducted conversations during which they interpreted what their characters were truly saying.

Councell used an Oxford English Dictionary on every word, emphasizing how important it was for her to understand what her character is saying while also incorporating movement into her acting.

“With Shakespeare, the language is everything, so what I realized with this production is to put [movement] on top of the language,” she said. “Titania speaks in a lot of imagery and poetic language about the world around her, but the world of chaos around her [also] describes her interior landscape, so it’s very important to me to get into character by being specific about not only the images I am speaking about but [also] how they affect me physically, vocally, and emotionally.”

In Midsummer, nonverbal actions are just as vital as the verse. During the production, people were assigned to watch a specific actors on stage to analyze their movements, because not one person can watch the movements of six characters on a stage at once.

Paul Kalina, a University of Iowa associate professor of movement studies, coached the student actors to perfect their actions as they rehearsed. Whether the movements included flirtatiously playing with a lover’s tie to running to a different area of the stage during a heated fight, each movement became essential in exposing the characters’ emotions. 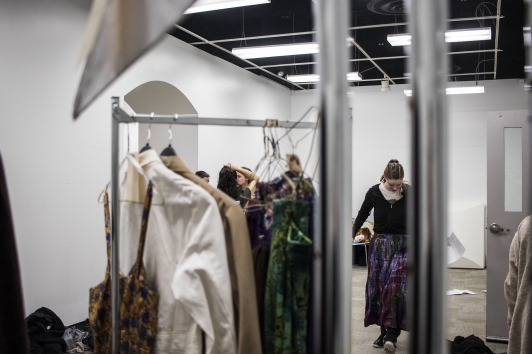 To accommodate such vigorous movement, costumes were expertly created by costume designer Catherine Parrott in collaboration with fabric buyers in New York. The picturesque costumes twirled with the characters and enabled them to run without tripping, while also authenticating the time period and distinguishing social classes.

Parrott also needed to determine how to create a costume to best portraying the actor who turns into an ass, one of the humorous moments in Midsummer. 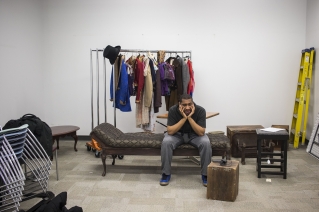 Some of the comical moments are subtle, while others are obvious, but all of the play’s humor elicited laughs from the designers on location during the tech rehearsals later in the semester.

Hearing the laughs from the design team helped the artistic team determine which elements audiences would find humorous.

During the production process, the cast and artistic team placed the audience in the forefront of their minds, seeking to mesmerize and engage with the audience during the performance.

Before the play begins, the cast will perform a 15-minute pre-show in which the characters prep for the first act as if they just arrived at Mabie Theater.

These characters are not only those from Midsummer, they also form the Wild Rose Players, a company within the production that helps the actors make connections with the characters in the play by creating a fictional back story for themselves.

During the early production stages, a poster titled “The Wild Rose Players” hung on the wall, depicting each cast member’s fictitious back story.

“[They] have [their] character in A Midsummer Night’s Dream, but [they] also have [their] ‘Wild Rose’ character, [who represents] who [they] are [in the production] and what your relationship is with everyone in the company, so [it’s] kind of a double-layered play within a play,” Kane said. “[The poster] was where they could write out what their name was in this company, their relationships with other characters, their back story, how long [they] have been with the company, [and] their role in the company.”

Both the characters in the Wild Rose Players and Midsummer will speak to the audience and roam through the aisles among theater seats, humanizing the characters and incorporating viewers into the production.

Audiences will be also engrossed in the performance as they witness sound effects, such as magic spells being created live with musical instruments such as chimes.

To even further transport audience members into the magical world, a LED wall will also be used for the first time in two years at the Theater Department.

“We are trying to incorporate [the LED wall] to be as realistic as possible [when illustrating] the magical world we are trying to create,” said assistant lighting designer Ryan McElroy, who is also one of the many undergraduates in the production. “An LED wall just [transports] people into that world.” 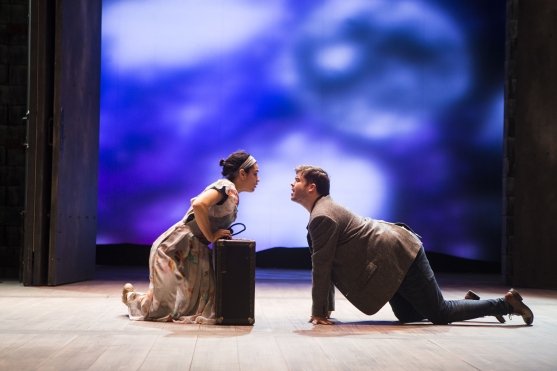 Stage props integrated alongside the LED wall will also play a major role in immersing the audience into the magical world.

“In this production, we are focusing on the Moon a lot,” McElroy said. “The Moon is the magical element that oversees everything, so we’ve been doing testing with [luminous] hand-held moons, [which we will] then project onto the LED wall.”

What began as an otherwise empty rehearsal room with a carpeted floor marked with Scotch tape to mirror the Mabie stage setup and inspiration boards of costume and lighting design ideas scattered around the walls soon evolved into a captivating production wrapped in humor, thrill, turmoil, and anticipation.

“[I’m anxious] to see how [the design elements] works with the magic,” McElroy said. “Just seeing it all together in real life and not on paper or on the computer is just really [exciting].”

A Midsummer Night’s Dream will mystically carry people into a new world they can encounter with others through intricate designs and integrative experience.