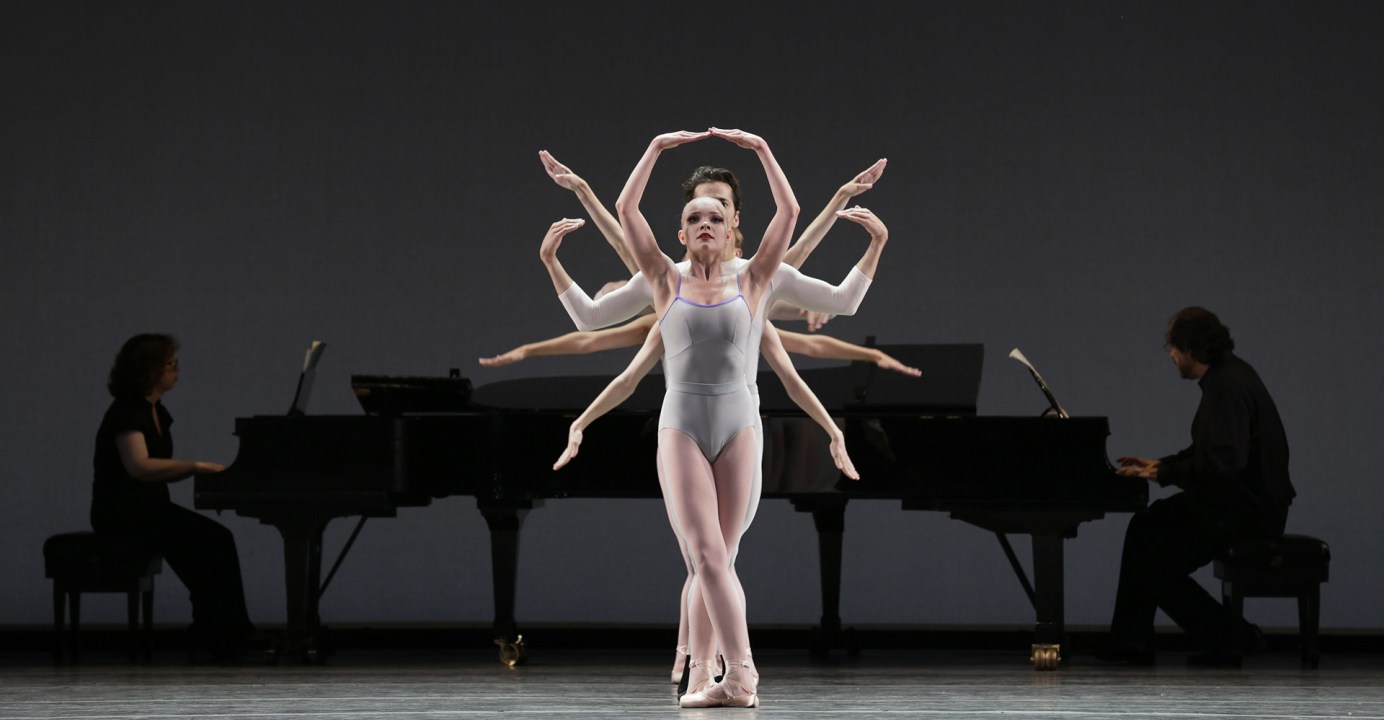 The New York City Ballet performed at Hancher during its MOVES tour, bringing along a small group of talented dancers, including Miriam Miller, who grew up in Iowa City.

On Tuesday and Wednesday evening, the New York City Ballet merged fantasy with reality when it performed at Hancher during its MOVES tour, mesmerizing the more than 850 people in the audience.

Ballet dancers moved swiftly across stage, their bodies moving fluidly, their dancing graceful and seemingly effortless. The live music and dancing was flawless and in sync , while the lighting and stage scheme enhanced the aesthetics of the performance.

Brian Anstedt, the Hancher production manager, said preparing for New York City Ballet’s performance was a long process. Stage workers spent eight hours on Oct. 21 and around 13 hours on Monday setting up the light plot and getting ready for the performance.

“It’s exciting for me to come to my hometown and perform,” said dancer Miriam Miller, who grew up in Iowa City. “I [was] excited to show my fellow colleagues the Midwest, because not everyone has been to Iowa. I [was] just excited to show everyone my hometown.”

Miller, who moved to New York City by herself when she was 15 to dance at the School of American Ballet, recently won the Princess Grace Award after being nominated by New York City Ballet Director Peter Martins.

This was the first time since 2004 that the company nominated someone for the prestigious award, which recognizes emerging artists. Humbly, with a hint of Midwestern values, Miller was shocked, not believing she would ever win the award.

The gala for the award occurred Wednesday, but she decided to stay in Iowa City to perform, proving just how important performing in her hometown was to her.

“It was definitely a magical experience,” Miller said about her Tuesday performance. “It was really special … I had a lot of tremendous support from everybody, and I felt so comfortable, and I was excited and happy to actually share this with Iowa City — what I do and what we do to the town.”

The New York City Ballet’s MOVES tour was more special than the larger tours that the ballet regularly performs with some of its 65 dancers, because it is not mandatory.

“[MOVES] includes people who want to go [and] want to be a part of this performance,” said New York City Ballet art administrator Jean-Pierre Frohlich. “It moves groups of dancers out of New York.

The dancers rehearsed for several weeks prior to the performances. “Some of the dancers are performing these dances for the first time,” Frohlich said. This provided a more extensive rehearsal for the dancers.

That may not be the most challenging part for the dancers, though.

“I would say the most challenging part is … not being too critical of yourself when performing,” Miller said. “Yes, there is a lot of athleticism in it, and a lot of maintenance, and a lot of rehearsing, and a lot of that and learning the choreography, but I think, ultimately, after performances, it is really hard not to get in your head or not to over-critique everything that you’ve done and not over-analyze it.

“I mean, it’s hard because we are looking in a mirror all of the time, and we’re always being analyzed with our bodies, and with our choreography, and who you are as an individual is always kind of being critiqued in a way, or being corrected. So, I think the challenge is finding the balance, knowing when to not go overboard … and not put yourself down or give yourself too many criticisms.”

But on Wednesday night, the thoughts of criticism were far from the audience’s mind; Miller and her colleagues received a standing ovation.

“I’m just in awe and completely in awe,” Miller said. “It’s been unimaginable — the amount of support that I had [and] how kind and nice and encouraging everyone has been. It has really been so special. I can’t even put it into words how happy I feel about that … I don’t think I ever had a standing ovation after doing a duet before. It was pretty incredible.”

For Iowa City specifically, New York City Ballet’s MOVES performance was more than a beautiful ballet performance. It gave the audience a sense of hopefulness to reach their aspirations.

“Just be you, and if you find something that you love and that you are passionate about … don’t try to imitate someone else,” Miller said. “Don’t be nervous to be different, and just do what you know and what you love, and have confidence with it.”